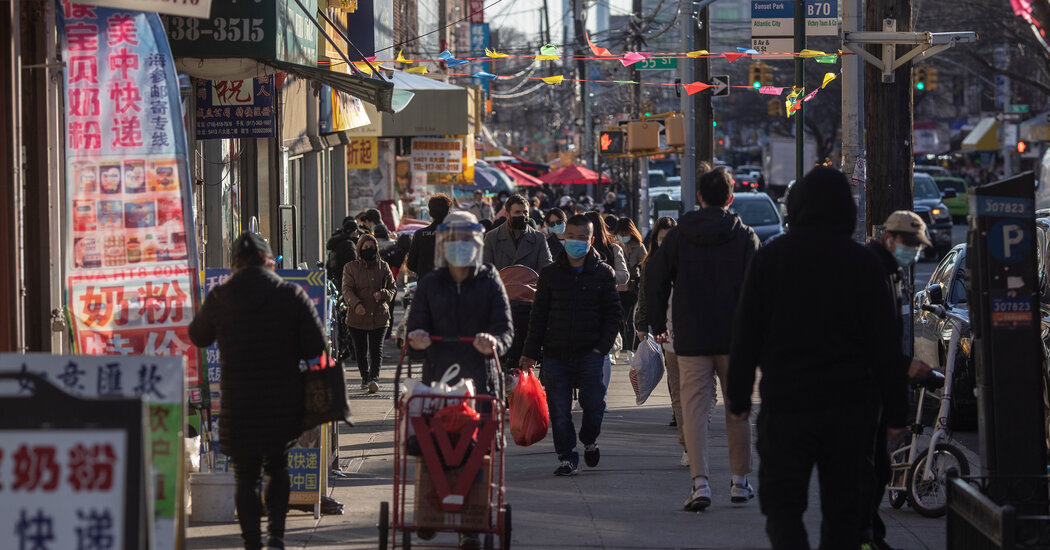 First came the virus, which John Chan said cost his restaurant hundreds of thousands of dollars in lost sales. Then came the surge in anti-Asian hate crimes, which has made some people jittery and kept them at home and away from the restaurant, further hurting business.

“It’s like the heavens are playing tricks on us,” said Mr. Chan, a community leader in Brooklyn’s Chinatown and the owner of the Golden Imperial Palace, a cavernous dining hall there.

More than a year after the pandemic first swept through New York, the streets of Sunset Park in southern Brooklyn reflect the pandemic’s deep and unhealed wounds intertwined with signs of a neighborhood trying to slowly edge back to life.

The sidewalks are filling with shoppers and vendors, and more businesses are open and welcoming customers. But owners still struggle to pay rent and keep their enterprises afloat, while many workers laid off after the city locked down last year are still without jobs.

And while the rate of vaccination in New York has increased significantly, the coronavirus still percolates through this densely packed neighborhood. The ZIP code that includes Sunset Park, which also has a significant Latino population, had the highest rate of positive cases in Brooklyn in early April, nearly double the citywide rate. Some residents have expressed skepticism about the vaccines, spooked by false information circulated over TikTok and other social media.

The spate of hate crimes and violence against people of Asian descent in New York and around the country, fed in some cases by racist claims that Asian-Americans are responsible for spreading the virus, has added to the stress.

“I’m telling you, if things don’t get better, I’m finished. Really finished,” Mr. Chan said, describing his persistent financial challenge. “And now we have to deal with this discrimination against us.”

As he sat inside his largely empty restaurant in Sunset Park, lyrics from an old Hong Kong pop song raced silently across the bottom of a large LED screen. Boxes of T-shirts reading “Stop Asian Hate” were stacked next to a banquet table.

Nicole Huang, who runs a local mutual aid effort and has close ties with the business community, estimated that roughly three dozen establishments, including restaurants, clothing stores and hair salons, had closed for good during the pandemic along Eighth Avenue, the neighborhood’s commercial heart.

Mr. Chan said he laid off 80 of his 100 workers and had not called any of them back. Like other restaurant owners, he tried to take advantage of outdoor dining, setting up tents in the parking lot. But after they were damaged by strong winds last November, he took it as a bad omen and gave up.

Bunsen Zhu, who runs a hair salon on Eighth Avenue and 50th Street, closed the salon two weeks before the city went into official lockdown last year, alarmed after reading dispatches from China. He also stocked up on face masks long before many other New Yorkers did. Still, that did little to insulate him from the financial onslaught of the pandemic.

Before the outbreak, many of Mr. Zhu’s customers were transient Chinese workers who spent brief periods of time in the neighborhood before fanning out across the country to work, typically in restaurants. But when the death toll soared in New York last spring, many of them did not return and still have not, hurting businesses that rely on them.

“It’s just so hard,” Mr. Zhu, 36, said as he stretched out on a couch in his hair salon. An employee sat at the other end, fast asleep. “You either starve to death at home or you try to make ends meet, somehow.” Like most of the people interviewed for this article, Mr. Zhu spoke in Mandarin.

Mr. Zhu used to have more than a dozen customers a day, but now he counts them on one hand. He has managed to keep paying rent after his landlord gave him a small discount, though he refused to provide details and is glum about what the rest of this year will bring. “We’re just waiting for this thing to finally blow over,” Mr. Zhu said.

At Pacific Palace, a dim sum parlor down the street from Mr. Zhu’s salon, customers are slowly trickling back, but not enough for the restaurant to make much of a profit.

The pandemic lockdown led the restaurant to postpone 40 weddings, according to its manager, Janet Yang, and all but four of the restaurant’s 60 employees were laid off.

“We have tried so many things to survive,” Ms. Yang said.

The restaurant started offering takeout for the first time, which now represents a third of its business. Outdoor seating never attracted many people, in part because the restaurant is known for hosting the type of large celebrations that were forbidden for months.

“The noise level has gone back up,” said Ms. Yang, pointing to the larger crowds on the streets. “But I feel that overall the neighborhood hasn’t recovered.”

Justin Cheng, 54, is one of the restaurant’s four remaining employees, called back to work as a waiter last September after being laid off in March. As the months wore on, he recalled, “we would eat less and less and eat cheaper food.”

Pacific Palace turned some of its outdoor space into a market, where a woman sat recently overseeing the sale of packaged goods like Chinese cookies and bags of goji berries. There were few customers.

Men selling seafood hawked oysters and fish out of Styrofoam boxes, competing with the bigger storefront fishmongers whose bins of iced seafood splayed out over the sidewalk.

Not far away, a woman was selling black chicken and duck meat; it was unclear whether she had the license required to sell raw poultry.

“It’s just a little business to make ends meet for a few more mouthfuls of food to eat,” said the woman, Ms. Jiang, as she plucked stray feathers from a chicken.

Ms. Jiang, 61, gave only her last name for fear of drawing the attention of the authorities. She hopped from the table where she was peddling poultry to another where she was selling earrings and bracelets.

She lives in the neighborhood with her husband and son, but she had been working at a Chinese restaurant in Florida when the pandemic struck. The restaurant closed, so Ms. Jiang returned to Sunset Park.

Not far away, Naian Yu, who operates a small garment factory on the fringes of the neighborhood, said he was dipping into his savings and he was worried about how much longer he could keep up with his $8,000 monthly rent.

Last year, he switched from supplying clothes to department stores like Nordstrom and Macy’s to making personal protective equipment, after he entered into an agreement with a company that was providing it to local hospitals.

The work became vital after the department store contracts dried up, but then the protective equipment contracts also stopped in December, leaving him and his employees in the lurch.

“It was our lifeline,” Mr. Yu said. Orders from department stores have resumed, he said, but they have not returned to prepandemic levels.

A torrent of hate and violence against people of Asian descent around the United States began last spring, in the early days of the coronavirus pandemic.

Tenants’ struggles to pay rent have also imposed hardships on smaller landlords who have mortgages and their own bills to pay.

Abdallah Demes is still looking for someone to fill the storefront in the building he owns on Eighth Avenue. He released his previous tenant from the lease months ago, two years before it was set to expire.

The tenant had been subleasing the space to a porcelain shop, but as a nonessential business it had to close during the lockdown, and the tenant told Mr. Demes he could not afford the more than $4,000 in monthly rent.

Mr. Demes had offered two months rent free. “‘Just stay,’ I told him,” he said. “But we both knew the business wouldn’t be able to last beyond the two free months. It was the right thing to do.”

Mengyao Zheng, 60, who operates a basement mahjong parlor, said players had been coming in and playing for hours at a time as “a way to relieve stress.”

At Chuan World, a Sichuan restaurant, the manager, Queenie Dong, was less worried about business rebounding than about social media posts she kept reading raising questions about the safety of coronavirus vaccines.

Ms. Dong, 30, said she became afraid after her phone filled with TikTok videos and WeChat posts falsely claiming that the vaccines were harmful and even lethal.

“Younger people feel that we should be fine,” Ms. Dong said. “We trust that masks are enough and that we’ll survive even if we get the coronavirus.”

After debating for weeks, her desire to protect herself won out over her anxiety and she wound up getting vaccinated.

About a third of the residents in Sunset Park have received at least one dose of the vaccine, roughly the same level as the city overall, according to the city health data. But local leaders say they want to push that number much higher.

Kuan Neng, 49, the Buddhist monk who founded Xi Fang Temple on Eighth Avenue, said that people had come to him in recent weeks to express concerns over vaccines.

“Why do I need to do that?” is a common refrain, according to Mr. Kuan, followed by: “I’m healthy now. The hard times are over, more or less.”

“Many people want to delay and see,” Mr. Kuan said, himself included.

Yu Lin, who operates two adult day care centers and is running for a City Council seat in a district that includes Sunset Park, contracted the virus last year, as did his wife and two children. He recently got vaccinated and encourages constituents to get their shots as he campaigns for office.

“People believe more if it involves an actual person, rather than getting information off of traditional media,” he said. “I tell them my experience, that there’s nothing to fear except for a little muscle pain.”

Ms. Yang, the dim sum parlor manager, is pinning her hopes on the vaccines.

“Everything is contingent upon the city opening up,” she said.

On the counter near the entrance was a red sign in Chinese: a prayer for good fortune. Next to it stood a cat figurine, one of its arms extended in mid-air, that is believed to bring good luck. Ms. Yang pointed to it and said, “That lucky cat has no batteries.”