Germany is abuzz with talk that Bayern Munich coach Hansi Flick may leave his role in the coming weeks after falling out with his bosses.

Even some Bayern fan clubs now think that a divorce is inevitable, despite Flick’s winning all six trophies possible over the past year and with another Bundesliga title looking very likely soon.

Flick’s response just before Bayern’s game as to whether he would be the head coach next year was simply: “Next question.”

Afterwards, captain Manuel Neuer said the subject amongst the players was not as big as imagined. Thomas Müller said with a big smile: “I’ll follow the coach and say next question.”

Even the day before the game, Flick said he would refuse to answer questions regarding his future.

“I am around 18 months in this job and I have a team that has developed,” Flick said.

“We are absolutely focused on our job,” he added. “It is important that we stick together.”

When asked why he had praised his coaching team and the squad and not the Bayern hierarchy, he pointedly remarked: “Everything has been said.”

So where has this all this rancor come from? Flick himself has fueled some of it by not explicitly ruling himself out of the running to replace Germany coach Joachim Löw after the Euros.

He has repeatedly said that “I have a contract at Bayern until 2023,” but has not expressly said he was not interested in the Germany job, which he is well-suited for, given his achievements with Bayern in just 18 months at the helm and because he was Löw’s assistant when they won the 2014 World Cup.

But the reason for the rumors about his departure is a perceived breakdown of relations with club bosses, specifically sporting director Hasan Salihamidzic.

When former Bayern midfielder Salihamidzic was appointed to the role, he was seen as just a yes-man to the more powerful chief executive, Karl-Heinz Rummenigge, and president, Uli Hoeness.

The surprise decision by Hoeness to step down and Rummenigge’s handing over the reins to Oliver Kahn at the end of this year have led Salihamidzic – nicknamed Brazzo – to carve out a more meaningful role. Reports say that has upset Flick, especially with regards to transfers and which players to keep.

“I have begun to think Hansi Flick will leave because he is fed up with Brazzo,” Bertram Ehmer, president of Bayern fan club Rothosen Munichen 1158, told DW.

Salihamdzic has not helped to quell the speculation. When asked directly by Sky before Wednesday’s Champions League clash with Paris Saint-Germain whether Bayern were looking for a new coach, he said: “We are only preparing for tonight’s game.”

He could have said no.

The obvious flash point is Jerome Boateng. Flick has been open in his praise of the defender but after 10 years, the 32-year-old is being let go at the end of the season.

“I have said everything and don’t want to say any more.”

It seems clear that Flick wants to keep a player with whom he won the World Cup. Bayern have already recruited RB Leipzig’s Dayot Upamecano for next term but with David Alaba also leaving, the defense looks like it needs more reinforcements. 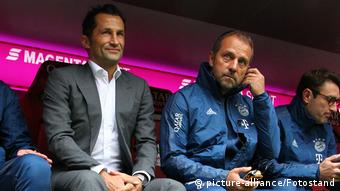 Salihamidzic often sits on the bench with Flick – a peculiarity of German sporting directors.

Flick may also be unhappy with Bayern’s business in recent transfer windows. Leroy Sané has flattered to deceive so far since his arrival and the bench has looked thin, although Bayern have been hit by various injuries and illnesses.

Bayern badly missed the injured Robert Lewandowski in the 3-2 home defeat to PSG in the Champions League quarterfinal first leg.

His fill-in, Eric Maxim Choupo-Moting, is clearly not in the same class, but he did score against PSG and, to be fair to Flick, he has given very clear backing to the Cameroonian. Moreover, world player of the year Lewandowski is simply irreplaceable.

Next Tuesday’s second leg against PSG could be a crunch point for Flick if holders Bayern go out.

But surely he will stay until the Bundesliga title – a ninth in a row for Bayern – is secured.

After that, it is anyone’s guess – especially if the German Football Federation (DFB) comes calling about the national team.

There is also another reason for Bayern fans to be worried about a possible Flick departure.

Apart from eight years as Germany assistant (2006-2014) and five years as Hoffenheim coach (2000-2005), he has often not stayed very long in his posts – especially if there are boardroom clashes.

He had a very brief stint as assistant at Red Bull Salzburg (2006), and left as the sporting director at the DFB (2014-2017) at his own request, despite being under contract for almost three more years. He had taken up the role having stepped down as Germany assistant.

A spell back at Hoffenheim as managing director in 2017 ended after just eight months.

Fans may ask why he signed a Bayern deal until 2023 as recently as last April, but it is clear that the problems have arisen in recent months and he was previously happy.

Things in football can move extremely rapidly, as Bayern might be about to find out.