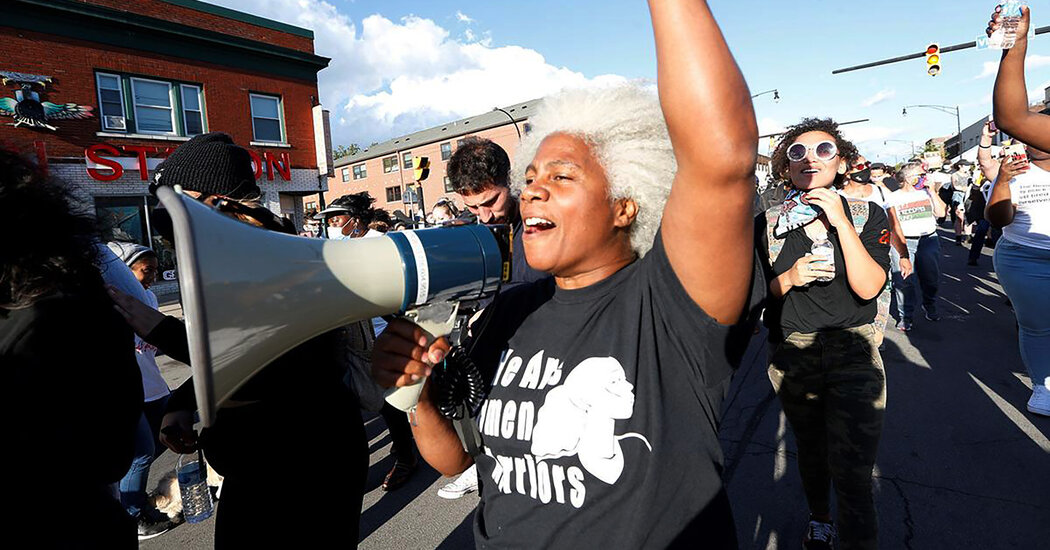 It was a cold November day in Buffalo when Officer Cariol Horne responded to a call for a colleague in need of help. What she encountered was a white officer who appeared to be “in a rage” punching a handcuffed Black man in the face repeatedly as other officers stood by.

Officer Horne, who is Black, heard the handcuffed man say he could not breathe and saw the white officer put him in a chokehold. At that point, court documents show, she forcibly removed the white officer and began to trade blows with him.

In the altercation’s aftermath, Officer Horne was reassigned, hit with departmental charges and, eventually, fired just one year short of the 20 on the force she needed to collect her full pension. She tried, and failed, more than once to have the decision reversed as unfair.

On Tuesday, in an outcome explicitly informed by the police killing of George Floyd, a state court judge vacated an earlier ruling that affirmed her firing, essentially rewriting the end of her police career, and granting her the back pay and benefits she had previously been denied.

“The legal system can at the very least be a mechanism to help justice prevail, even if belatedly,” the judge, Justice Dennis E. Ward, wrote.

His ruling also invoked the deaths of Mr. Floyd and Eric Garner, a Black man from Staten Island whose dying words — “I can’t breathe” — have become a national rallying cry against police brutality.

In a statement, Ms. Horne, 53, celebrated the decision.

“My vindication comes at a 15-year cost, but what has been gained could not be measured,” she said. “I never wanted another police officer to go through what I had gone through for doing the right thing.”

A lawyer for the white officer, Gregory Kwiatkowski, did not respond to a request for comment. A spokesman for Buffalo’s mayor, Byron Brown, said the city had “always supported any additional judicial review available to Officer Horne and respects the court’s decision.”

The 2006 encounter that led to Ms. Horne’s firing began as a dispute between a woman and a former boyfriend whom she had accused of stealing her Social Security check. When officers tried to arrest the former boyfriend, the situation turned violent.

An internal investigation cleared Officer Kwiatkowski of all charges; Ms. Horne was offered a four-day suspension, which she turned down. After hearings in 2007 and 2008, the Police Department found that her use of physical force against a fellow officer had not been justified.

She was fired in May 2008. Officer Kwiatkowski was promoted to lieutenant the same year.

“Her conduct should have been encouraged and instead she was fired,” W. Neil Eggleston, a lawyer for Ms. Horne, said in an interview.

The dispute between Ms. Horne and Officer Kwiatkowski did not end when she left the Police Department. He sued her for defamation and won a $65,000 judgment against her.

Officer Kwiatkowski’s own police career ended under a cloud. He retired in 2011 while facing an internal affairs investigation and he was indicted the next year on federal civil rights charges stemming from the arrest of four Black teenagers. He ultimately pleaded guilty and was sentenced to four months in prison.

After she was fired, Ms. Horne worked odd jobs, including as a truck driver, and sometimes lived in her car, The Buffalo News reported. The death of Mr. Floyd in Minneapolis, where former Officer Derek Chauvin is now on trial for murder in the killing, brought new attention to her case and the circumstances surrounding it. (Three other officers who were present when Mr. Floyd died were also charged in the killing.)

She filed a lawsuit seeking to vacate the firing, citing the case involving Mr. Floyd. Shortly before that, she and others in Buffalo had begun to press members of the city’s legislature, the Common Council, to pass a so-called duty-to-intervene law requiring officers to step in when one of their own used excessive force.

The Buffalo Police Department had adopted such a rule in 2019, and last fall the council approved what it called “Cariol’s law” by a vote of 8 to 1.

Darius G. Pridgen, the council president, said a confluence of factors — including Ms. Horne’s advocacy from firsthand experience and the increased scrutiny on police misconduct in the wake of Mr. Floyd’s death — had created an environment for action.

“During the protests we were trying to reach for ways to hold bad police officers accountable,” Mr. Pridgen said. After the killing of Mr. Floyd and the demonstrations that followed, he said, “the timing was perfect.”

The law also gives officers who have been terminated in the past 20 years for intervening to stop the use of excessive force a chance to challenge their firings. In an unusual twist, Ms. Horne’s suit cited the law named for her to argue for that outcome.

Ms. Horne’s lawyers said that although she had been fired for wrongfully intervening in an arrest, her actions had been consistent with what is expected of police officers: She had kept a civilian safe.

“And after George Floyd,” Mr. Eggleston, a former White House counsel under President Barack Obama, said, “we really understand what happens if officers don’t act like that.”