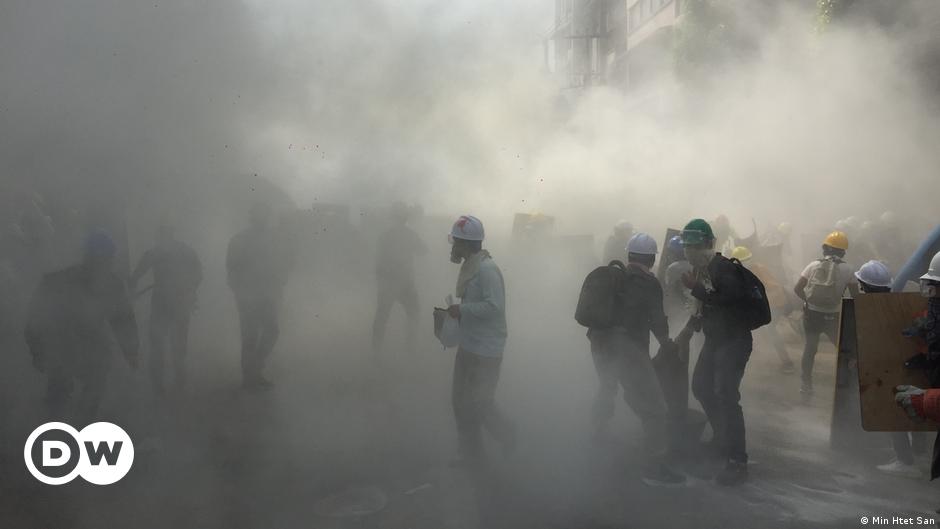 In Myanmar, resisting the military’s coup is a perilous affair. Activists are constantly on the run — moving from one safe house to the next while carrying a burner phone. And, each evening, they delete every image from it.

For it is in the dark of night, when the internet has been disconnected by the junta, that the army swoops in, abducting activists, journalists, and anyone else it suspects of resisting its takeover on February 1, from their homes.

Since then, thousands have taken to the streets across Myanmar, formerly known as Burma. Hundreds have been killed in the protests, with many more arrested.

Myanmar citizens are also resisting the coup in other ways. Phone apps have begun to crop in Myanmar, such as one called “May May Nay,” meaning “go away.” Protesters use the app to identify which businesses have ties to the military — and boycott them. 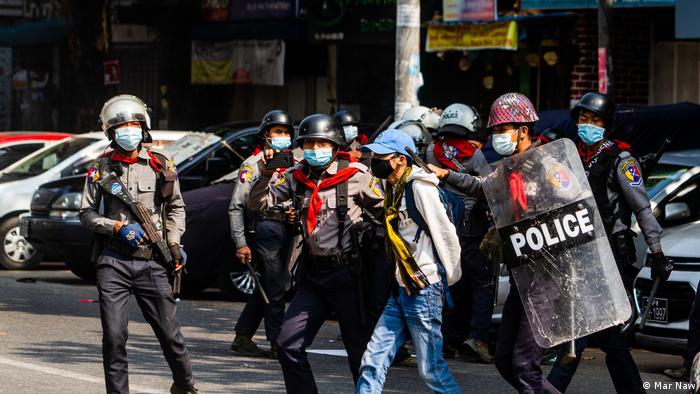 For the Tatmadaw, as the army is called, has built a vast business empire. It consists of two major holdings, and a myriad of intertwined subsidiaries, joint ventures and smaller companies that enrich both the army and individual generals.

And the spouses and children of military personnel are also an integral part of this opaque network, according to a DW investigation.

It’s impossible to fathom the extent and depth of the Tatmadaw’s economic power without first delving into the army’s two holdings: Myanmar Economic Holding Limited (MEHL) and Myanmar Economic Corporation (MEC).  Both were established in the 1990s when the country was ruled by a previous iron-fisted military junta.

They are run by both active and retired military personnel, operating in the shadows without any independent oversight.

Business interests span gem production and mining, oil and gas extraction, banking, tourism and telecommunications. Dozens of companies across diverse sectors of the economy are owned by the two holdings, many others are affiliated with MEHL and MEC.

A 2019 UN Fact-Finding Mission identified more than 100 businesses fully owned by MEHL or MEC, noting that it was certain that it had not been successful in identifying all subsidiaries. The authors concluded that “MEHL and MEC and their subsidiaries generate revenue that dwarfs that of any civilian-owned company.”

The two holdings are exempt from paying income and commercial tax, making it impossible to gauge the extent of their revenues.

As the country carefully transitioned to democracy in 2010, the Tatmadaw and high-ranking military officials further built and consolidated vast business empires through the acquisition of capital, land and assets. In numerous cases, analysts say, state assets were sold to favored companies, including those controlled by high-ranking officers and their families.

The children and spouses of many military leaders own and run numerous personal economic ventures. In some cases, they were awarded lucrative contracts and joint ventures with MEHL, MEC, and their subsidiaries.

Take, for example, the military’s commander-in-chief Min Aung Hlaing, who in late March gravely warned protesters: “You should learn from the tragedy of earlier ugly deaths that you can be in danger of getting shot in the head and back.”

He has been targeted for sanctions by the European Union, UK and US for serious human rights abuses committed by Myanmar’s military following the coup and the earlier brutal crackdown against the Rohingya, a Muslim minority in Myanmar. 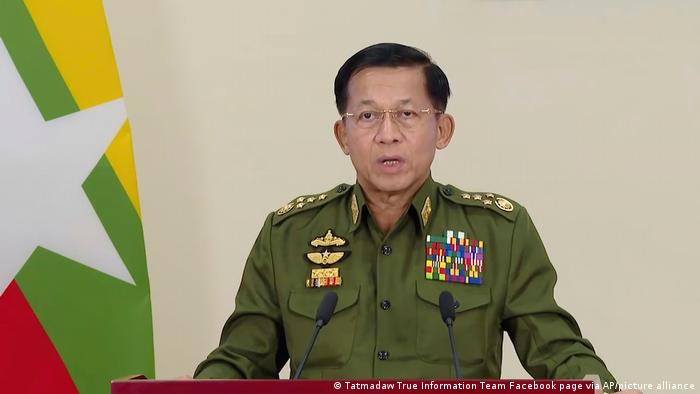 The US Treasury went a step further and, on March 10 of this year, targeted his son, Aung Pyae Sone, and his daughter, Khin Thiri Thet Mon.

The reason, according to a Treasury statement, is their control of a “variety of business holdings, which have directly benefitted from their father’s position and malign influence.”

The Treasury listed six businesses run by Min Aung Hlaing’s two children, who are both in their 30s.

These include a somewhat eclectic portfolio, including a medical import business, restaurant, art gallery, chain of gyms, and a TV entertainment business.

Pinnacle Asia Company Limited is controlled by the army chief’s daughter, the latter two by his son.

So far, none of these companies has been targeted by sanctions. In a statement to DW, a US State Department spokesman did not directly address whether additional companies would be sanctioned, but emphasized it would “continue taking further action to respond to the brutal violence perpetrated or enabled by Burma’s military leaders.”

The data was scraped from the company registry of DICA, Myanmar’s Directorate of Investment and Company Administration, and made publicly available by DDoSecrets, a US-based group that publishes information sourced from whistleblowers and activists.

This data also includes loan agreements and other business documents.

Pinnacle Asia, the data shows, was registered in November 2016 and lists its main business activity as “telecommunications.”

In May 2020, another document shows, it was awarded a loan by a Myanmar bank to build 17 cell phone towers across Myanmar for Mytel. According to the loan agreement, Pinnacle Asia had already set up 60 towers in various regions.

Mytel is one of four telecommunications providers in the country and was set up as a joint venture by the militaries of Myanmar and Vietnam. 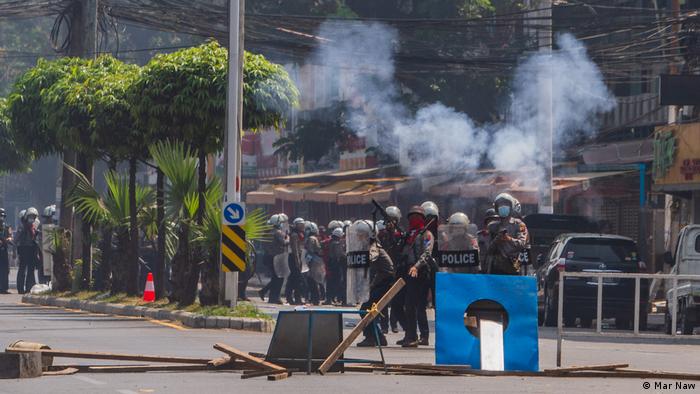 Hundreds of protesters have been killed since the coup.

Since the coup, all four telecommunications providers in Myanmar have been ordered to severely limit access to the internet.

Right now, the only way to access the internet is through fiber optic cable, meaning Wi-Fi and mobile phone data have been completely cut off for a majority of internet users.

Activists also fear that Mytel may be used to track protesters’ phones.

“The army chief’s daughter’s closed-door dealings not only channel profits to the family of war criminal Senior General Min Aung Hlaing but also support the military’s other abuses of Mytel, including to build military communications infrastructure, access international technology and to conduct surveillance,” says Yandanar Maung, a spokeswoman for Justice for Myanmar, a group of Myanmar activists who document the Tatmadaw’s abuses.

On March 17, a week after the US sanctions were imposed, Khin Thiri Thet Mon was removed as Pinnacle Asia’s company director, company registration documents show.

Pinnacle Asia did not respond to DW’s requests for comment on its investigation, including why Khin Thiri Thet Mon had been removed as director.

In the case of Attractive Myanmar and Photo City, Aung Pyae Sone was not removed as director following his designation by the US.

Photo City Company Limited was registered in January 2021 — but did not list any business activity in its registration documents. DW did not find any online presence for the company.

The exact nature of Attractive Myanmar is equally unclear. Company records show that it was registered in late 2019 as providing services in a wide range of almost 30 distinct activities, including accounting, advertising and travel services.

A website registered to the company shows glossy pictures of tourist destinations in Myanmar but has no information on the company’s actual activities.

It is not unusual for military-linked and owned companies to cover such a wide range of business activities, according to rights group Justice for Myanmar. 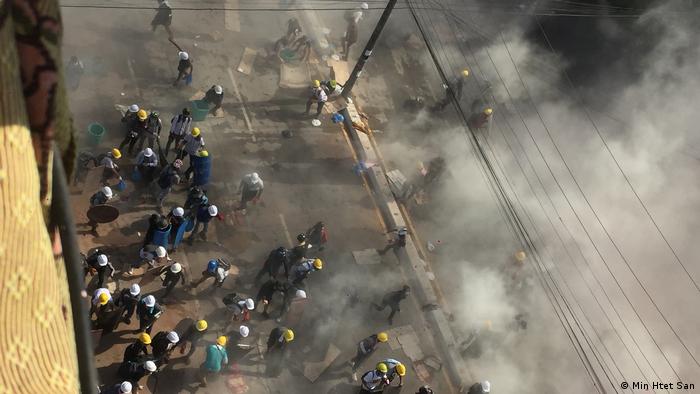 Security forces use tear gas and live ammunition against demonstrators

In doing so, the commander-in-chief and his children may be staking out their claim in emerging sectors and squeezing out any potential competition.

And, given that they are often awarded contracts through contacts rather than fair and transparent bidding procedures, there is no need to advertise their companies or services online.

Recent moves by the now-deposed government of Aung San Suu Kyi to implement an anti-corruption framework were unlikely to have been viewed favorably by the military and its crony companies.

Myanmar’s Embassy in Germany did not respond to DW’s request for comment on the regime’s business ties involving Min Aung Hlaing and his two children.

Foreign companies, too, have established links with military ventures in Myanmar. Activists are rushing to compile lists to pressure them to sever all ties and pull out their investments.

One such company, Kirin Holdings, a Japanese beverage company, announced it would end its partnership with MEHL shortly after the coup. Others, including clothing company H&M and car manufacturer Ford, have followed suit.

Both the UK and US have targeted MEC and MEHL with economic sanctions in recent weeks. This includes a freeze of all assets in both countries.

The European Union may soon move to target the military’s business interests, too. A spokeswoman for the European Council told DW that its policy recently changed to also allow for the sanctioning of business entities — but stopped short of saying whether the bloc would target the two Myanmar companies.

Can sanctions harm the junta?

But it is unclear if these moves can dislodge the junta.

While observers note that the ongoing boycotts and walkouts by Myanmar people may have a destabilizing effect, many of the Tatmadaw’s business interests are domestic — and so potentially less impacted by any international sanction.

Those that rely on exports, namely the country’s natural resources, including oil, gas and gems, are to a great extent traded with its Asian neighbors. And they have, so far, shown little appetite to sever ties with Myanmar. 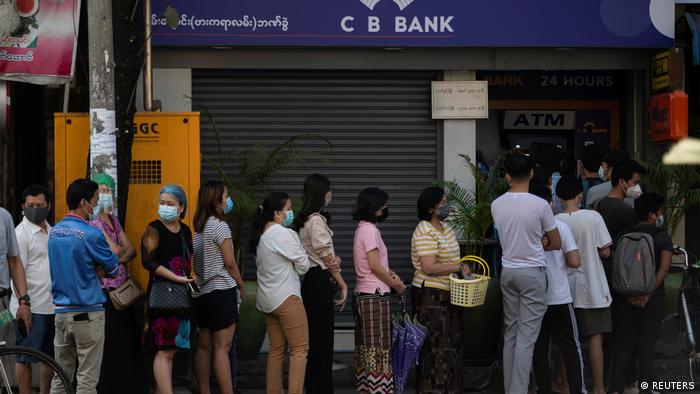 For many protesters in Myanmar, like Htay, the sanctions are toothless, allowing the army to go untethered.

“International sanctions have been imposed on the Burmese military junta for many years,” Htay says, adding that such measures have failed to rein in the regime.

This, however, hasn’t stopped Htay and other activists from risking it all each night, hurrying from one safe house to the next, armed with only a burner phone to document the junta’s crackdown.

“My personal protests will continue until we get democracy and end the military dictatorship,” he says.

Editor’s note: DW has changed the name of the activist to protect their safety.