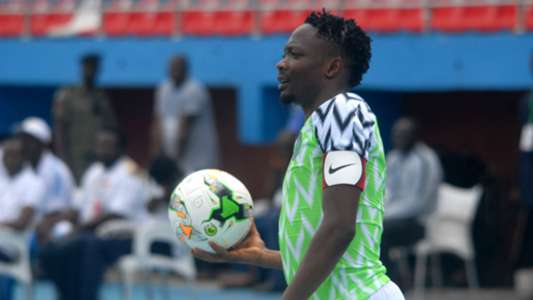 After leaving his Saudi Pro League side, the Super Eagles captain completed a temporary move to the Sani Abacha Stadium on Tuesday

Since leaving Saudi Arabia Pro League side Al Nassr in 2020, the 28-year-old had been without a team.

However, with his return to the Sani Abacha Stadium for a second spell, Musa will stay in shape ahead of the World Cup qualifiers, which are a few months away.

As expected, football enthusiasts have taken to social media to express their feelings.

Ahmed Musa’s return to Kano Pillars is one of the best strategy to improve and attract interest in our local football teams and National league.After global come local.Its better than hanging and idling in Europe.There will always be a place for you at home.@thenff

Seriously I love Ahmed musa move to Kano pillars, it will help grow our domestic league

When players like him returned back home to retire just as the Southern American players do, it helps add value to the nation domestic league…. I hope others follow suit and come back home

Ahmed Musa officially back to Kano Pillars is one huge win and needs to be Properly promoted, The captain of the Super Eagles, still in his prime playing for the Local league na confirm Cruise.

Most players would stay clubless than playing in the NPFL, Respect to MUSA. pic.twitter.com/SaYxAAf1oe

Having a player like Ahmed Musa in the league is a plus for the league PR guys but can they really capitalize such huge advantage??

Hopefully we can start selling some merchandise.#ahmedmusa

Ahmed musa coming back to play for kano pillars shows how humble man he is. Someone with his reputation and a lot to spend throughout his lifetime even without playing football again deserves nothing but respect…. Indeed you’re and icon sir🙌@Ahmedmusa718

Now, Kano Pillars and Ahmed Musa trending all over. That will attract so much for him and the team. If other players could do same, Nigerian teams would be popular.

If Ahmed Musa is retiring then calm. Y’all don’t have problems with other players going back to where they started to finish their careers. Now that it’s Ahmed Musa you just dey shout

Great news to see Ahmed Musa back in the Nigerian league.
This is a model NFF LMC has to work hard to continue, just as the Brazillians and Argentines do, mostly. It’ll improve the brand image of Naija league.

Ahmed Musa Has The Capacity To Own “Kano Pillars” Yet He Joined As A Person Player. He Is Indeed Humble To The Core.

So the logic is to use Ahmed musa to improve and attract interest in our domestic league.

Time to start watching the league because of Ahmed musa 😂😂😂

I wish fans could return to stadia in their numbers to really enjoy having a live view of Ahmed Musa playing in the NPFL.

Musa is not just Super Eagles captain but also the highest scoring Nigerian in the World Cup.

It’s a short-term deal with so much positivity.

I am absolutely overwhelmed by Ahmed Musa’s move to Kano Pillars. A big steal for the football club. The brand in his name. The glamour and candor his arrival would attract at the Sani Abacha Stadium. Amazing.

Ahmed Musa’s decision to Reunite with his former employers Kanu Pillars was logical and timely. Playing regular football with Pillars will secure his already dwindling stay in the super eagles. I hope @ogujohnugo also gets a club & start balling again.

Mamelodi Sundowns keeper Onyango: Everyone will be gunning for us