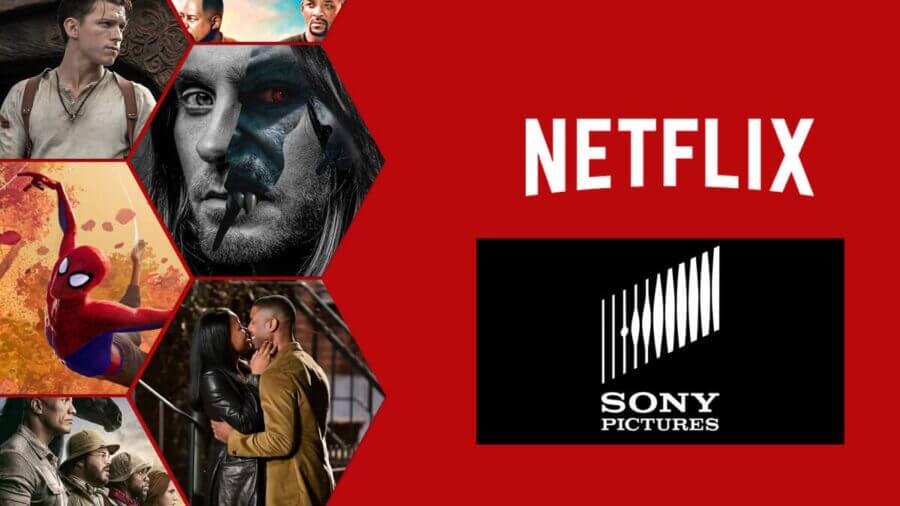 With the news Netflix in the United States is going to be getting Sony Pictures movies from 2022 for five years, this post will list all the new theatrical content coming to Netflix from Sony over that period.

We are expecting a catalog of Sony Pictures titles from the past to also hit Netflix at some point. We’ll cover this in a separate article with most of the Sony movies expiring from Starz (where the Sony library mostly was last) over the next few years.

Again, this is just the brand new theatrical content we know about. We’ll also expand this list over time to include the direct-to-Netflix titles that will be skipping a theatrical release (more on that via Variety).

Sony capitalized on the growing popularity of Escape Rooms but added a sinister and deadly twist to the concept. The first film made over $155.7 million worldwide, and only a shoestring budget of $9 million. It’s a no-brainer why Sony continues to invest in the franchise when it’s already shown to make a quick and easy profit.

Escape Room 2 is the first of two Sony Pictures movies to arrive on Netflix in October 2022.

After surviving the first deadly game, Zoey and Ben will be forced into an even deadlier game by the puzzle master, with an even lower chance of surviving the horror that waits for them.

Even though Sony and Marvel Studios came to an agreement with adding Spider-Man to the MCU, the studio still reserves the right to use the large library of characters from the web-slinger. This is what lead to the creation of the Venom movie, and now with Morbius the establishment of Sony’s own cinematic universe within the MCU.

While Sony occupying its own space within the realms of the MCU may sound confusing, the gaps between the two are starting to be bridged together, and plans for a future Sinister Six film are looking more and more likely.

It’s been five years since Jared Leto’s disastrous appearance as the Joker in the Suicide Squad, so the academy-award-winning actor will be hoping to find success in a rival superhero franchise instead.

Michael Morbius, a brilliant scientist plagued by a rare blood disease tries to cure himself but inadvertently infects himself with Vampirism.

With an incredible and extensive library of video games, Sony has no shortage of games ready and waiting to be adapted into full feature-length movies. So, 14 years after the debut of the Uncharted franchise on the PlayStation 3, Nathan Drake is finally coming to life on the big screen.

Opting to go with a younger Nathan Drake, popular Spider-Man actor Tom Holland will take on the role, with Mark Whalberg portraying the role of Drake’s mentor Sully.

The first installment of the franchise will take place before the events of the video games, and will tell the story of Nathan Drake in his youth and how he came to meet and befriend Sully.

Spider-Man: Into the Spider-Verse 2

Without a doubt, Sony’s Spider-Man: Into the Spider-Verse is one of the best-animated movies in history and rightfully earned the Oscar for the best animated film at the 91st Academy Awards.

The sky is only limited by imagination, and a film budget for the upcoming animated Spider-Man sequel, and if it’s anything like its predecessor then we are all in for an amazing time.

Little is currently known about the plot of the Spider-Verse movie, but at the very least we’re expecting to see even more famous variations of the webbed wonder.

With the film still planned to premiere in October 2022, subscribers will have to wait until the Summer of 2023 before it arrives on the Netflix library.

I Wanna Dance With Somebody

Sony won the bidding war for the film’s rights to Whitney Houston’s biopic, which means we could see a future Oscar nomination for actress Naomi Ackie, who is taking on the mammoth lead role.

The screenplay of Whitney Houston’s life is being penned by Anthony McCarten, who was responsible for writing Queen biopic Bohemian Rhapsody.

With the biopic not set to hit theatres until late 2022, subscribers are going to be waiting until the Summer of 2023 before it’s available to stream on Netflix.

Despite the fact that both Fanning sisters have been acting since childhood, surprisingly, the siblings have never acted alongside each other on the same project until The Nightengale.

The project has been in the making since 2016, but due to several factors, principal photography didn’t begin until October 2020. TriStar, the distributor of the movie have rescheduled the release of the film twice, postponing a December 2021 release date to December 2022

The film is based on a screenplay written by Dana Stevens, who based the story on the novel of the same name written by Kristin Hannah. The story is centered around two sisters who are struggling to survive during the German Occupation of France during World War 2.

Undated Movies Coming to Netflix Beyond 2022

The writers behind A Quiet Place are in the director’s seat for their new sci-fi thriller 65. The film is being co-produced by Raimi Productions, with Sam Raimi as one of the executive producers.

At this time little is known about the plot, but with Adam Driver on board, we can’t wait to hear more about 65.

Brad Pitt leads an exciting ensemble cast in David Leitch’s action-thriller. Filming wrapped up on Bullet Train in March 2021 which means we’re unlikely to see a theatrical release until 2022, which means we may not see the feature on Netflix until 2023.

Five assassins on board a Japanese bullet train discover that their individual assignments are tied to each other.

For only the fourth time of his career, two-time academy-award-winning actor Denzel Washington is going to be in the director’s seat for a feature-length film. This is also the first time Washington himself won’t be starring in a lead or supporting role.

Before he is killed in action while serving in the US Army in Baghdad, 1st Sgt. Charles King authors a journal for his son, hoping his written words can teach him to live a decent life despite growing up without a father.

Masters of the Universe

Netflix subscribers will be very familiar with Noah Centino, the teen-drama heartthrob of the To All the Boys trilogy, The Perfect Date, and Sierra Burgess Is a Loser. Moving on from teen-dramas Centineo will star in his biggest role to date as Prince Adam/He-Man in the long-anticipated live-action remake of Masters of the Universe.

He-Man, the most powerful man in the universe faces off against his evil nemesis Skeletor, as he fights to protect the planet of Etheria and the secrets of his home, Castle Greyskull.

The fourth film of the Jumanji franchise is still in the early stages of development, which means filming may not begin for a significant period of time. There’s also no confirmation that the cast of the previous two films will be returning to reprise their roles, but we’d definitely expect to learn more in the coming months, especially once filming on Black Adam is over for Dwayne Johnson.

Movies in Development at Sony Pictures

Which Sony movie are you excited to watch on Netflix? Let us know in the comments below!