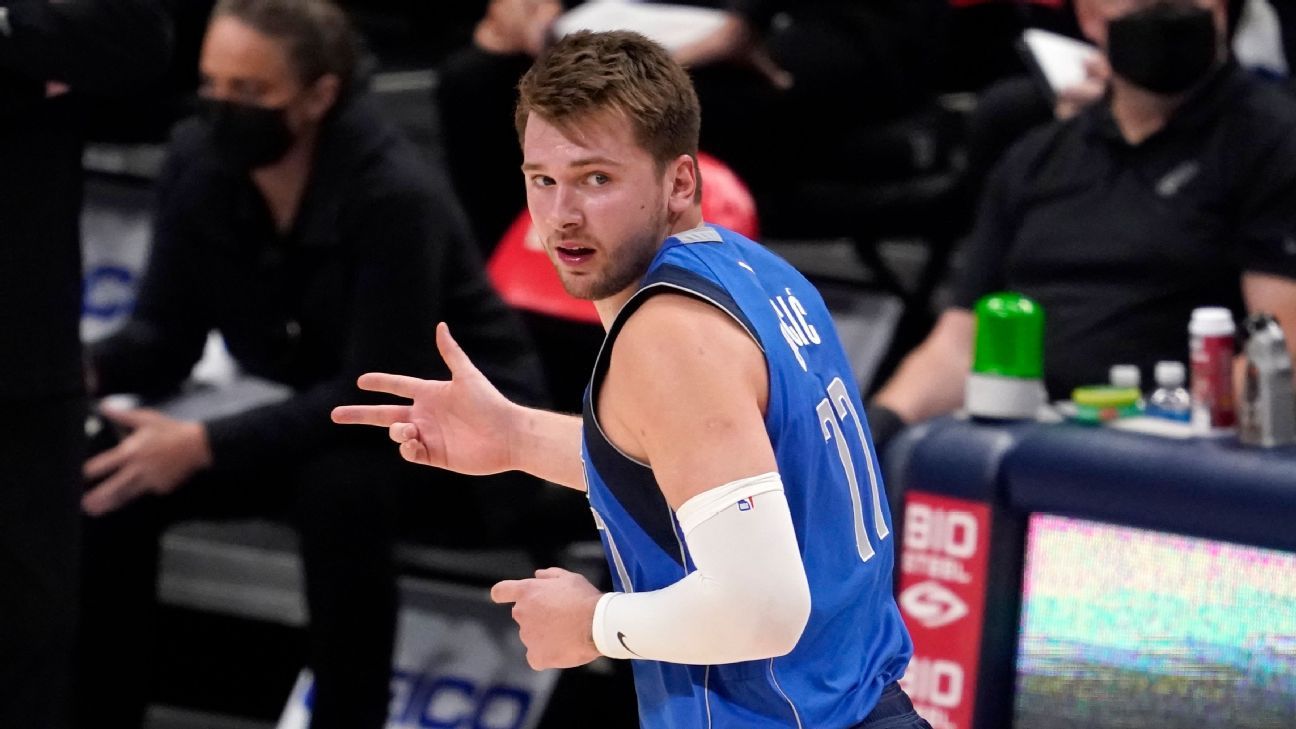 LUKA DONCIC HITS the brakes, changes directions with a behind-the-back dribble, then picks up the ball and steps back to his left before launching a 3-pointer.

It’s March 31 inside Boston’s TD Garden, and Celtics guard Marcus Smart, one of the NBA’s premier on-ball defenders, has just gone from within breathing distance of Doncic to too far away to contest the shot in less than a second.

A couple of possessions after that bucket, Smart picks up Doncic at half court. There’s no dancing this time. Doncic drives past Smart to his right, collapsing the Boston defense before kicking out to Jalen Brunson for a wide-open 3-pointer on the left wing.

The Celtics switch after a high screen the next possession, and Doncic hits an easy midrange step-back over Grant Williams. Then Kemba Walker gets caught in a switch, and Doncic easily hits a step-back 3 over him. A couple of trips later, it’s Jayson Tatum‘s turn, and he actually stays with Doncic as the Dallas Mavericks star crosses over left to right and steps back.

It doesn’t matter. Doncic drills the contested 3, giving him 24 points on nine field goal attempts with about a minute left in the first half.

Finally, the Celtics find a solution to slow down Doncic: a double-team. Even the best defenders struggle to solve such a big, skilled, multifaceted offensive threat one-on-one.

There isn’t a foolproof plan for containing Doncic, who is averaging 28.6 points and 8.6 assists per game in this third NBA season, ranking in the top six in both categories.

ESPN asked a trio of the best on-ball defenders from the past couple of decades — Tony Allen, Bruce Bowen and Metta Sandiford-Artest, who combined to earn 18 All-Defensive team selections and five championship rings — what their approach would have been to defend Doncic.

“When I watch Luka, I always think, ‘How would I have stopped him?’ says Sandiford-Artest, who was known by his birth name Ron Artest when he won the 2003-04 Defensive Player of the Year award.

“It’s getting more difficult to see.”

‘You know what? I ain’t giving that step-back 3 up’

ALLEN, THE MAN Kobe Bryant anointed as the best defender he ever faced, would sit on Doncic’s left hand. “The Grindfather” is well aware that Doncic is right-handed and more than capable of carving up defenses off the dribble. That’s how much respect Allen has for Doncic’s step-back 3.

That’s Doncic’s favorite skill. He’s 71-for-191 (37.2%) on step-back 3s this season, according to NBA.com/stats. Like Brooklyn Nets star James Harden, Doncic has rare deceleration ability, especially considering his 6-foot-7, 230-pound frame, helping him stop and change directions while maintaining body control, keys to creating space for the shot. Doncic has worked on functional strength training to make his balance even better, as well as spending hours honing his shooting stroke.

Luka Doncic finds space with a step-back and sinks a deep 3-pointer.

That has helped Doncic develop his step-back into one of the league’s most lethal moves — and it’s the one tool that Allen vows he wouldn’t let Doncic use against him.

“If you score on me, you’re going to have to score on me that hard every time. But one thing that I’m taking away is that left-hand dribble to step back into that shot. That rhythm, nah, I’m not never letting you get comfortable to go into that. I’m on you.”

At this moment, the 6-foot-4, 220-pound Allen drops into a defensive stance. He pretends to shade Doncic to the supersized point guard’s left.

“Go right. Do whatever you’re going to do,” Allen yells, sliding as he speaks. “You going to drive and lay it up? All right, I’m going to contest. Can you step back going right? OK then! You’re going to have to do everything to that right side. And what if you try to come back? I’m right here, motherf—er. I’m taking it!

“You can’t get discouraged with prolific players. They’re going to score, but your job is to contain it and cut it down. I can give you what you’re going to take, because you’re cold. That’s how good you is, because you’re Luka Doncic. But [if he gets comfortable with his step-back], it’s like, ‘Damn, who’s sticking him? Next!’ If I’m going to defend him, I’m going to put myself to the test and say, ‘You know what? I ain’t giving that step-back 3 up.'”

Allen admits his approach might draw too much attention from referees, especially with the way they’re instructed to enforce rules in today’s NBA. Allen figures he probably couldn’t get away with the forearm that he’d want to use to slow down Doncic as he’s trying to drive. But Allen would push the limits as far as possible.

“I can spell my first foul and set the tone and say, this is how I’m playing tonight, so he can know when and what not to call with me being physical,” Allen says. “I want to waste my first foul and let him know that I’m here tonight, whether it’s pushing his ass real hard or whatever the case may be. I’m here! ‘Ref, c’mon ref. I’m First-Team All-Defense! This is how I play! C’mon, man, let me play.’

BOWEN’S PLAN IS make Doncic uncomfortable every moment he has the ball in his hands, no matter how far he is from the basket. The goal: Take a mental and physical toll on Doncic.

“Even though he’s not a player that’s rushed, I’m going to pick you up full court as much as possible and make you work — turn, turn, turn, turn — so that you’re not having a fresh mindset when it comes to attacking in the half court,” Bowen says.

“If I can be a little physical with him and make him work a little bit more, a lot like [defending] Steve Nash. Now when it comes time to finish plays, maybe he’s not as geared to finish the plays quite like he was in the beginning, because he’s being pressured a little bit. Now he has to worry about what I’m doing from the standpoint of making him work, work, work while he has the ball and bringing it up the floor.

“It’s not something comfortable. Yes, he can do it. But does he want to do it? Probably not.”

Bowen emphasizes that every detail matters while defending a player of Doncic’s skill and talent, one who easily exposes fundamental slips.

Bowen cites the dagger floater Doncic hit after beating Paul George in the Mavs’ March 17 win over the LA Clippers. Bowen notes that George overcommitted on the play, getting set up by Doncic for a crossover dribble and “stopped playing up high” once Doncic created an advantage.

Bowen’s mission would be to contest every dribble and challenge every shot without freelancing outside of the game plan.

“First of all, you’ve got to respect him and what he’s doing. Secondly, now you’ve got to match that energy with that respect to make sure that you are doing what’s necessary when it comes to following the game plan.”

SANDIFORD-ARTEST OFFERS a piece of advice for Doncic in this hypothetical matchup: “Get in tip-top shape.”

Sandiford-Artest, who played for Mavs coach Rick Carlisle with the Indiana Pacers when he won Defensive Player of the Year, always wanted to make his individual matchups a conditioning challenge. He can think of only a couple of opponents — LeBron James and Kobe Bryant come to mind — who were consistently up to that challenge.

Sandiford-Artest was much more than a defensive specialist, averaging 18 points per game during a seven-season span in the prime of his career. He’d often be especially aggressive offensively when matched up against superstars, wanting to make them work at that end of the floor. But he wouldn’t be able to use that tactic against Doncic, as the Mavs typically give him the least taxing defensive assignment possible.

Sandiford-Artest would dare Doncic to beat him off the dribble, at least for most of the game, in anticipation that his legs would feel heavy by the fourth quarter.

There is significant risk in that strategy, as Doncic ranks among the NBA’s most effective drivers. According to Second Spectrum player tracking data, only Sacramento’s speedy point guard De’Aaron Fox has scored more points off drives this season than Doncic, who also ranks second behind Atlanta’s Trae Young in assists created off of dribble penetration.

Luka Doncic blows past the defense and drives it in for the two-handed finish.

Although Doncic doesn’t have explosive leaping ability, he’s a phenomenal finisher, shooting 58.2% off of drives, trailing only Milwaukee’s Giannis Antetokounmpo among the 38 players with at least 500 such possessions this season. Doncic is a master at creating angles in the traffic around the basket, using a blend of deception and brute force, and has a soft touch on floaters and other finishes.

“For the first three quarters, it would be really hard for you to get a jumper, unless you’re coming off a screen. That was just my thought process guarding guys. You’re going to have to drive. And I don’t mind a guy getting 15 or 20 in the first quarter. If you’re getting that against me in the first quarter, you’re probably done.”

Sandiford-Artest believes that he could have more than held his own as an isolation defender against Doncic. He’s not so sure how he would have fared trying to disrupt Doncic as a pick-and-roll operator — if solid screens were set.

Sandiford-Artest says, “Most of the time people set bad screens,” especially if it required a collision with him. He’d punish the Mavs’ big men — Kristaps Porzingis, Willie Cauley-Stein and Dwight Powell, all significantly lighter than Sandiford-Artest’s playing weight — if they held their ground on a screen.

“Guys didn’t want to even screen me, because I’m bigger than the power forwards,” Sandiford-Artest says. “A lot of guys are not going to keep setting screens on me. I mean, Kendrick Perkins did that, but I’m 260 and going full speed. I’d get them out the way. You’ve got my hips, my thighs, my knees. You’re not going to want to keep screening me, not going to want to keep hitting me. A lot of times, guys didn’t really want to set screens, and if you’re passing to the screener, you’re risking turnovers.”

When Sandiford-Artest watches Doncic, he’s as fascinated as much by his savvy as his skill, readily admitting that he would have had his hands full trying to slow down the Mavs’ star.

“It would have been a task I’d have been up for. I think some guys just give up.”