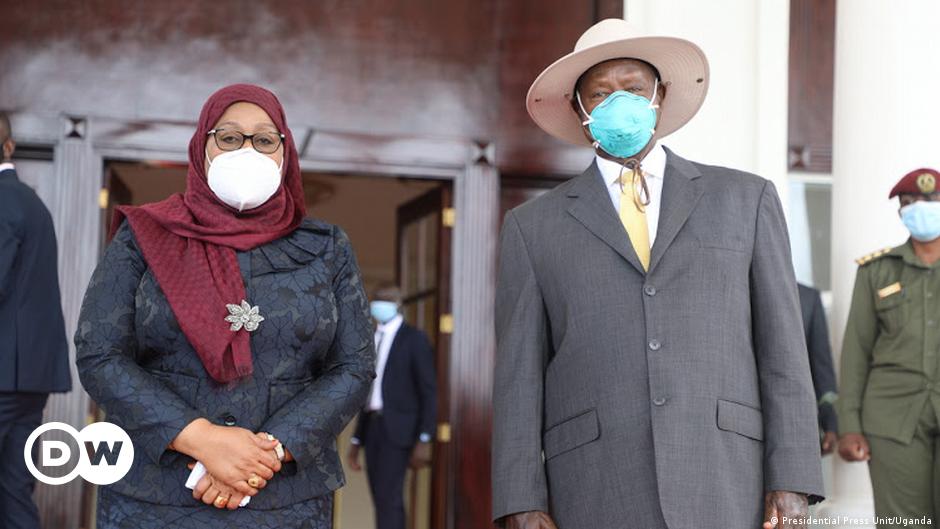 Uganda, Tanzania and the French oil company Total, along with its investment partner in Uganda, the China National Offshore Oil Corporation (CNOOC), signed a series of agreements on Sunday to build a heated pipeline that will carry crude oil from western Uganda to the Indian Ocean coast.

The deal, worth $3.5 billion (€2.9 billion), and the secrecy surrounding the details have raised public fears of corruption.

Uganda’s crude oil is highly viscous, which means that it needs to be heated to remain liquid enough to flow. The East African Crude Oil Project Pipeline (EACOPP) could be the longest electrically heated crude oil pipeline in the world, at 1,400 kilometers (850 miles). Construction is expected to begin this year.

Tanzania’s new leader, President Samia Suluhu Hassan, was in Uganda to witness the signing of the documents — perhaps her most important executive action since her inauguration in March.

The event was “an auspicious occasion” that would unlock the development of the region’s oil resources, she said. The shareholder agreements cover the construction of the pipeline, which is designed to connect oil fields near Lake Albert to the Tanzanian port of Tanga.

Ugandan President Yoweri Museveni hailed the deal as a major milestone and a victory for the countries.. 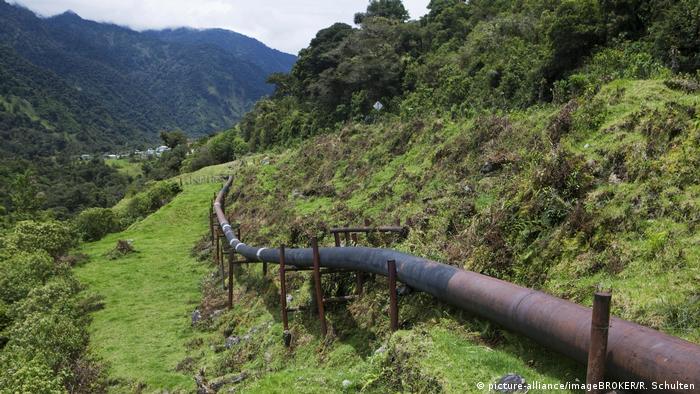 At 1,400 kilometers the East Africa Oil Pipeline project could be the longest heated pipeline in the world

A blessing or a curse?

Robert Kyomuhendo Ruhigwa, a resident of Uganda’s Albertine region where the oil was discovered 15 years ago, is hopeful that the pipeline project will create much-needed jobs for unemployed youths.

“We have a lot of expectations. I’m a 25-year-old and I expect that when government gets money from oil, it will invest it in education. We don’t have any universities in the region. We expect the government to work with the oil companies to ensure that the youth get jobs,” he told DW.

Kampala residnt Christopher Kisekka is doubful that the oil sector holds benefits for Ugandans. “Many Ugandans are expecting to supply these companies with needed materials but requirements to be are suppleir are very high and very few people will meet these requirements,” he told DW.

Beneath the waters and on the banks of Lake Albert, a 160-km natural border separating Uganda from the Democratic Republic of the Congo, lie some 6.5 billion barrels of crude, of which about 1.4 billion barrels are currently accessible.

The Uganda reserves could last 25 to 30 years with a peak production of 230,000 barrels per day. However, on March 1, more than 250 local and international organizations addressed major banks in a letter calling upon them to refrain from financing “the longest heated crude oil pipeline in the world”, according to AFP news agency.

The letter cites “extensively documented risks”, including “impacts to local people through physical displacement …risks to water, biodiversity and natural habitats; as well as unlocking a new source of carbon emissions”.

Despite anxiety over falling crude prices in recent years, hopes have remained high in Uganda over the potential for oil exports to lift the East African country into upper-middle-income status by 2040. The annual per capita income in Uganda was less than $800 in 2019.

A 2015 World Bank study emphasized that the economic benefits would be considerable if local companies are competitive enough to win lucrative service contracts in the oil sector.

Total and CNOOC, must honor commitments to award about 30% of the contracts to suppliers of Ugandan origin, said Robert Kasande, permanent secretary with Uganda’s Ministry of Energy and Mineral Development. “We believe that this should be a catalyst” for economic growth, he said. 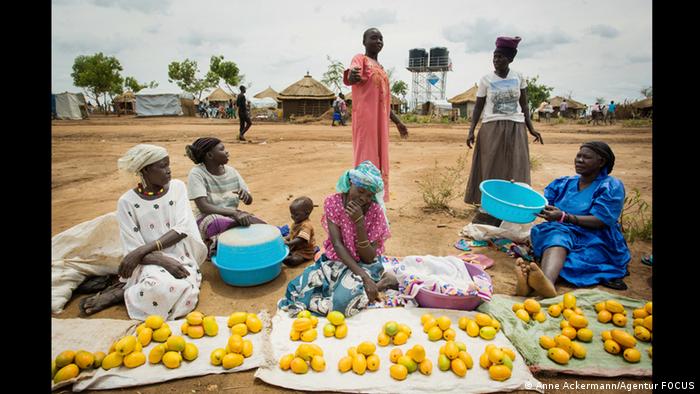 Watchdog groups and others also have warned against the personalization of Uganda’s oil resources and heavy borrowing by national budget authorities anticipating oil revenue.

Civil society groups led by the African Institute for Energy Governance (AFIEGO) have been urging the governments of Uganda and Tanzania and the oil companies to call off their plans.

The AFIEGO noted that some of the people affected by the pipeline have not been compensated and that the oil developments are also taking place in an ecologically sensitive conservation area.

In an interveiw with DW, Diana Nabiruma, the communications head for AFIEGO, said: “Previously Uganda has signed secret agreements, and Ugandans have lost. For instance, the president told us that electricity in Uganda is expensive because government officials conspired to sign agreements that favor bidding companies. Now we are seeing this being repeated in the oil sector.”

They continue to question the fact that the oil deals are still secret despite Uganda being a member of the Extractives Industries Transparency Initiative, Nabiruma added.

But Martin Tiffen, the Managing Director of East African Crude Oil Pipeline (EACOP), said every person affected by the project will be compensated before construction commences.

“We have evaluated the land, crops on the land, and the buildings on the land. But we have not asked the people to leave, of course. We will let the people harvest their crops and continue with their daily routines,” Tiffen said.

President Museveni, who has led Uganda since 1986, has sometimes suggested that the discovery of commercially viable oil quantities in 2006 created an opportunity for him to remain in power. “They are targeting my oil,” he said of his challengers in the country’s 2016 presidential election.

His personalization of the oil fields quickly dashed hopes in Uganda that the country could become an oil Eldorado. After that, the scramble to evict residents began and was often perpetrated by Museveni’s cronies and members of his inner circle. 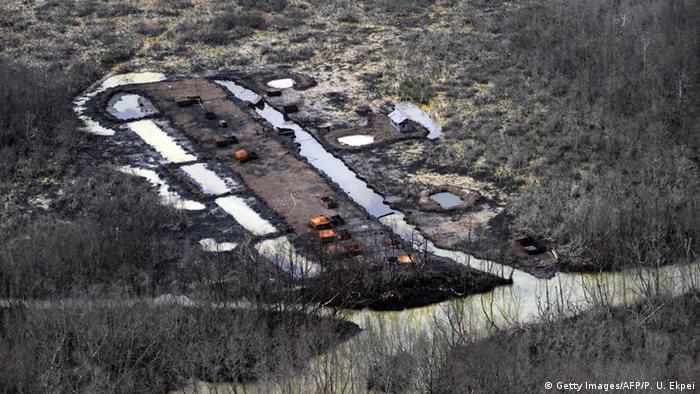 Plans for the pipeline have recently been attacked as “irresponsible” by activists who say it isn’t compatible with the goals of the Paris climate accord. Critics also say the rights of residents are at risk and that the pipeline, which would cross rivers and farmland, will damage fragile ecosystems. The project could cost more than 12,000 families their land rights, the Paris-based International Federation for Human Rights recently charged.

But criticism of the pipeline project is likely to persist. “Despite our persistent calls for urgent action from the Ugandan government, Total, and CNOOC, the oil project is accelerating while most of our concerns and recommendations remain unaddressed,” Antoine Madelin, advocacy director of the International Federation for Human Rights, told The Associated Press.

“Major environmental and human rights risks remain. The top priority should be to deal with the concerns of communities suffering from the project, not start drilling at all cost.” Irene Batebe, Uganda’s commissioner in charge of oil operations, downplayed fears that oil production will not benefit local communities.

“No, I wouldn’t say that the oil and gas industry in any way is going to be a curse,” she told DW. “We have put in place the necessary mitigation measures to ensure that the oil benefits the communities in the region. We have also tried to sensitize the communities about the opportunities that are available.”

Facing calls to abandon its projects in Uganda, Total last month said it would limit oil extraction from a national park to less than 1% of the protected area. The company also said it would fund a 50% increase in the number of game rangers in Murchison Falls National Park, Uganda’s largest protected area.

Total acknowledged “significant social and environmental stakes” posed by oil wells and the pipeline and pledged to proceed responsibly. Patrick Pouyanne, the Total CEO and chairman, said the Ugandan investment would exceed $10 billion. While challenges remain, there’s hope “to see the first oil tanker” by early 2025, he said.

It remains unclear when Uganda will export its first drop of crude since developing storage sites, processing facilities, and other key infrastructure will take time. The agreements signed Sunday also must be codified into legislation in both Uganda and Tanzania.

Ahatesham Rabbi - June 21, 2021 0
Price: (as of - Details) Easy-to-make, all-natural bath bombs and other beauty indulgencesImagine sinking into a tub filled with heavenly scented bubbles that...

Ahatesham Rabbi - June 21, 2021 0
Price: (as of - Details) Oydisen Electronics sells computers with professional upgrades and customization. The manufacturer box will be opened by our engineers...